[NC Rep. Mike Hager is a former employee of Duke Energy, the largest supplier of electricity in the United States, which contaminated groundwater at 33 of its coal ash storage lagoons at 14 sites across North Carolina, and forced the public to pay for the cleanup. They were found to have never performed the simplest tests that would have prevented massive pollution. House Bill 298 would fully repeal North Carolina’s renewable portfolio standard (RPS)—a state law requiring utilities to generate more electricity from clean sources over time. As described below, this activity also has the Koch Brothers thumbprints all over it. *RON*] 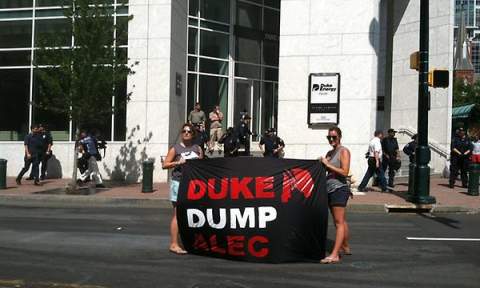 By introducing a bill to fully repeal North Carolina’s RPS law, Rep. Hager is backtracking on his own promise not to eliminate current renewable energy targets for NC’s dominant utility, Duke Energy. From the Charlotte Business Journal last December:

But Rep. Hager abandoned this position, instead marching in lockstep with the American Legislative Exchange Council’s full repeal initiative.

ALEC has many other members in the NC legislature, including House Speaker Thom Tillis, who just joined ALEC’s national Board of Directors.

ALEC’s Electricity Freedom Act, the model bill reflected in Rep. Mike Hager’s H298, was born from its Energy, Environment and Agriculture task force and was written by the Heartland Institute, a member of the task force. Other members of ALEC anti-environmental task force include Koch Industries, ExxonMobil, Peabody Energy and Duke Energy.

Duke pays heavily for ALEC’s operations–they have spent $116,000 on ALEC meetings since 2009, including $50,000 for ALEC’s May 2012 meeting in Charlotte, NC where Duke is headquartered (Charlotte Business Journal). This well exceeds the top annual ALEC membership fee of $25,000.

As I wrote in January, Duke Energy (recently merged with Progress Energy) is nowbacktracking on their support for North Carolina’s clean energy standard:

Less than a year ago Duke Energy was explicitly opposed to an ALEC RPS repeal in North Carolina. Now Duke’s NC president says they are “open to conversations” on changes to the RPS.

Duke Energy helped pass the RPS laws in North Carolina and Ohio, another state where ALEC legislators are introducing versions of the Electricity Freedom Act.

Through ALEC, Duke Can Kill Clean Energy Requirements and Get its Money back from Ratepayers:

This provision reflects a late change ALEC made to it’s model RPS repeal bill, perhaps at the request of ALEC member utilities like Duke Energy. Text added to the Electricity Freedom Act allows utilities to recover compliance costs from RPS laws after they are repealed. Compare last year’s draft version of the Electricity Freedom Act with the final version from October 2012–you’ll notice the key additions, particularly this clause:

BE IT FURTHER RESOLVED, that this Act also recognizes the prudency and reasonableness of many of the renewable contracts and investments and allows for recovery of costs where appropriate;

Sue Sturgis at the Institute for Southern Studies notes that Rep. Hager’s bill isn’t the first legislative attempt to kill North Carolina’s renewable portfolio standard. One of the co-sponsors of Hager’s bill already tried to repeal the RPS law in 2011:

Last year, Rep. George Cleveland (R-Onslow) — among the state lawmakers with ALEC ties – sponsored a bill to overturn North Carolina’s renewable energy law. It gained no co-sponsors and went nowhere, but the outcome could be different now that ALEC is getting more actively involved in the issue.

Legislators who have taken aim at clean energy incentives have been egged on by corporate interest groups, often with money trails leading back to the Koch brothers, Art Pope, and other wealthy elites. Sue Sturgis detailed how ALEC and other State Policy Network groups were gearing up to repeal the RPS before Mike Hager introduced his bill yesterday:

Last year, representatives of the groups gave presentations around the state that were critical of the state’s renewable energy standard. Among the presenters was Daren Bakst, director of legal and regulatory studies for the John Locke Foundation and a member of ALEC’s Energy, Environment and Agriculture Task Force, which crafted the model law overturning state renewable energy standards.

Joining Bakst were representatives of the American Tradition Institute (ATI), a fossil-fuel industry-funded think tank that was behind a controversial freedom of information lawsuit against the University of Virginia that sought to discredit a prominent climate scientist. ATI has also targeted state renewable energy programs.

Several years ago, the John Locke Foundation teamed up with the Beacon Hill Institute, a conservative research organization that has received support from the Koch family foundations, to release a report claiming North Carolina’s renewable energy law was having a negative economic impact.

One of the first groups we can expect to see chime in will be the Beacon Hill Institute. ALEC and other State Policy Network members have used Beacon Hill’s fundamentally flawed reports as the justification for repealing state RPS repeals in NC, KS, OH and other states. See these sources for a debunk of the Beacon Hill papers:
Beacon Hill will not be alone. We can expect continued support for the clean energy attack from Art Pope’s front groups like the John Locke Foundation and the Civitas Institute and other State Policy Network affiliates funded by Pope, the Koch brothers, and Donors Trust.

This is exactly what is happening with the Kansas clean energy standard: representatives of several State Policy Network groups including the Beacon Hill Institute, the Heartland Institute, the American Tradition Institute’s Chris Horner swarmed into Kansas to support the RPS repeal.

As the debate around Mike Hager’s bill unfolds, we’ll see who the Kochs send in to support his effort.
corporatocracy corruption oil and gas pollution realpolitik US